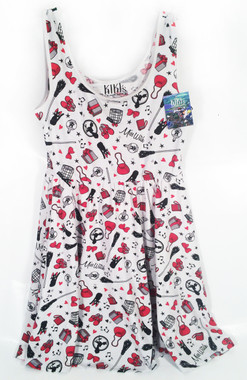 Made by Her Universe

Veteran animator Hayao Miyazaki directs this buoyant children's adventure yarn about a young witch striking out on her own. At her mother's behest, 13-year-old Kiki sets out on a year-long apprenticeship with her black cat in tow. With a shaky command of her broom, she ends up in a charming little coastal town that looks like a cross between the French provincial and San Francisco. Unfortunately, the local hotels have a strict no witches policy and the police have taken a dim view of her recent aerial mischief making. She's saved from the street by a kindly baker's wife who offers her room and board in exchange for her delivering by broom the baker's wares. Soon she befriends a college-aged artist, an old women who fusses over her, and a boy her same age who is nursing a massive crush. All is well until she wakes up one day and realizes that she can't make her broom levitate nor can she talk to her cat. What will Kiki do? ~ Jonathan Crow, All Movie Guide

Kiki's Delivery Service - Official Trailer (01:58)
The enchanting and beloved works of Studio Ghibli can now be yours to own forever, digitally! Watch your favourite classic Ghibli films again and again, whenever and wherever you want!

All prices are in USD. Copyright 2021 planetxtoys. Sitemap | Shopping Cart Software by BigCommerce