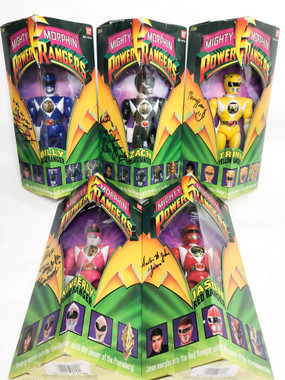 Sorry but this item is currently unavailable.

Please check back at a later stage.

Some of the signatures have to Kristy on them

'Mighty Morphin Power Rangers': Season 1: Official Opening Theme # 4 - [HD] - [DVD QUALITY] !!!! (01:02)
This is the fourth official high-definition - [HD] - "Opening Theme" # 4, and as a reprised Song Intro, from the very first opening in Season 1, with new a scene added the 'Mighty' 'Mega-Dragonzord' merged with the extremely-powerful 'Ultrazord', temporarily replaced the absence of Tommy Oliver (Jason David Frank)'s and The Green Ranger's appearance They are from one of Children and Adults' beloved and classic iconic TV Series called the: 'Mighty Morphin Power Rangers' aired on TV from 1993 to 1996. And it is from the 'Mighty Morphin Power Rangers': 'The Complete Series.' DVD Box-set, released last year on August 20th, 2012. SYNOPSIS/PLOTLINE: # 1.) In 1993, two unsuspecting astronauts unleashed the greatest evil Earth had ever known: the heinous witch Rita Repulsa. In the 20 years since, with each new villain more sinister than the last, the citizens of Earth have relied on the Power Rangers to protect them. A superhero team comprising "teenagers with attitude," the Power Rangers must use their individual strengths combined with the virtue of teamwork to vanquish their foes, keeping Earth safe for another day. After its premiere in August of 1993, Mighty Morphin Power Rangers became a phenomenon in children's programming unlike anything the world had ever seen. An instant global sensation, the franchise launched a hugely successful toy line, live stage tour, theatrical feature film and, most importantly, two continuous decades of entertainment, capturing the imagination of multiple generations of fans. Now you can see where the international sensation started with the complete first series, Mighty Morphin Power Rangers, on 19 discs, including two discs of rarely seen archival material and brand-new retrospective featurettes! # 2.) Mighty Morphin Power Rangers is an American live-action children's television series about teenagers with super-powers, based on the 16th installment of the Japanese Super Sentai franchise, Kyōryū Sentai Zyuranger.[3] Both the show and its related merchandise saw unbridled overnight success, becoming a staple of 1990s pop culture in mere months.[4][5][6] Under the original name, "Mighty Morphin Power Rangers" the series ran from 1993 to 1995 and spawned the feature film Mighty Morphin Power Rangers: The Movie.[7] The second and third seasons of the show drew on footage and elements from the Super Sentai series Gosei Sentai Dairanger and Ninja Sentai Kakuranger respectively, though the Zyuranger costumes were still used for the five main Rangers and several regular villains. Only the mecha and the Kiba Ranger costume (worn by the White Ranger) were retained from Dairanger for the second season, while only the mecha from Kakuranger were featured in the third season. However the Kakuranger costumes were later used for the title characters of the mini-series, Mighty Morphin Alien Rangers. The series was produced by MMPR Productions, distributed by Saban Entertainment, and aired on Fox Kids. The show's merchandise was produced and distributed by Bandai Entertainment. In 1996, the series was rebranded as the Power Rangers franchise; renaming the series every year after, and using costumes, props, and footage from subsequent Super Sentai series, as well as changing the cast and storyline. While an overarching storyline would continue until Power Rangers Lost Galaxy, subsequent series after MMPR are not sequels or spin-offs in the traditional sense. In 2010, a re-version of Mighty Morphin Power Rangers, with a new logo, comic book-referenced graphics, and extra alternative special effects, was broadcast on ABC Kids, and Bandai produced brand new toys to coincide with the series.[8][9][ * # 3.) Mighty Morphin Power Rangers (often abbreviated as "MMPR") is a live-action television and movie series based on the Super Sentai series Kyōryū Sentai Zyuranger, literally Dinosaur Squadron Beast Ranger and often abbreviated as Zyuranger (after the Kunrei-shiki romanization). Although Zyuranger was the main Sentai used for MMPR, it also uses elements (mecha and monsters) from Gosei Sentai Dairanger, literally Five-Star Squadron Dairanger, in its second season and Ninja Sentai Kakuranger, or Ninja Squadron Kakuranger, in it's third season. At the time, the Super Sentai genre was one of Japan's hottest tokusatsu properties, and Haim Saban seized an opportunity to adapt it for American audiences. The show first aired on Fox Kids on August 28, 1993 and ended on February 17, 1996. On January 2, 2010 a reversion of the series with a new logo, comic book-referenced graphics, and alternative special effects began airing on ABC Kids but was cancelled after airing 32 first-season episodes. The theme music, "Go Go Power Rangers," was often parodied, and many of its subsequent incarnations contain the words "Go" or "Power Rangers" in their theme music. THANKS!!! ENJOY, RATE, SUBSCRIBE, AND PLEASE COMMENT!!! NO COPYRIGHT INFRINGMENT INTENDED!!! HAPPY 2OTH ANNIVERSARY POWER RANGERS!!!!

This product hasn't received any reviews yet. Be the first to review this product!

All prices are in USD. Copyright 2021 planetxtoys. Sitemap | Shopping Cart Software by BigCommerce